The Origins and Trends of Plastic Pollution

Since the conception and mass adoption of plastic in various industries, plastic pollution has become one of the most pressing environmental issues around the world. 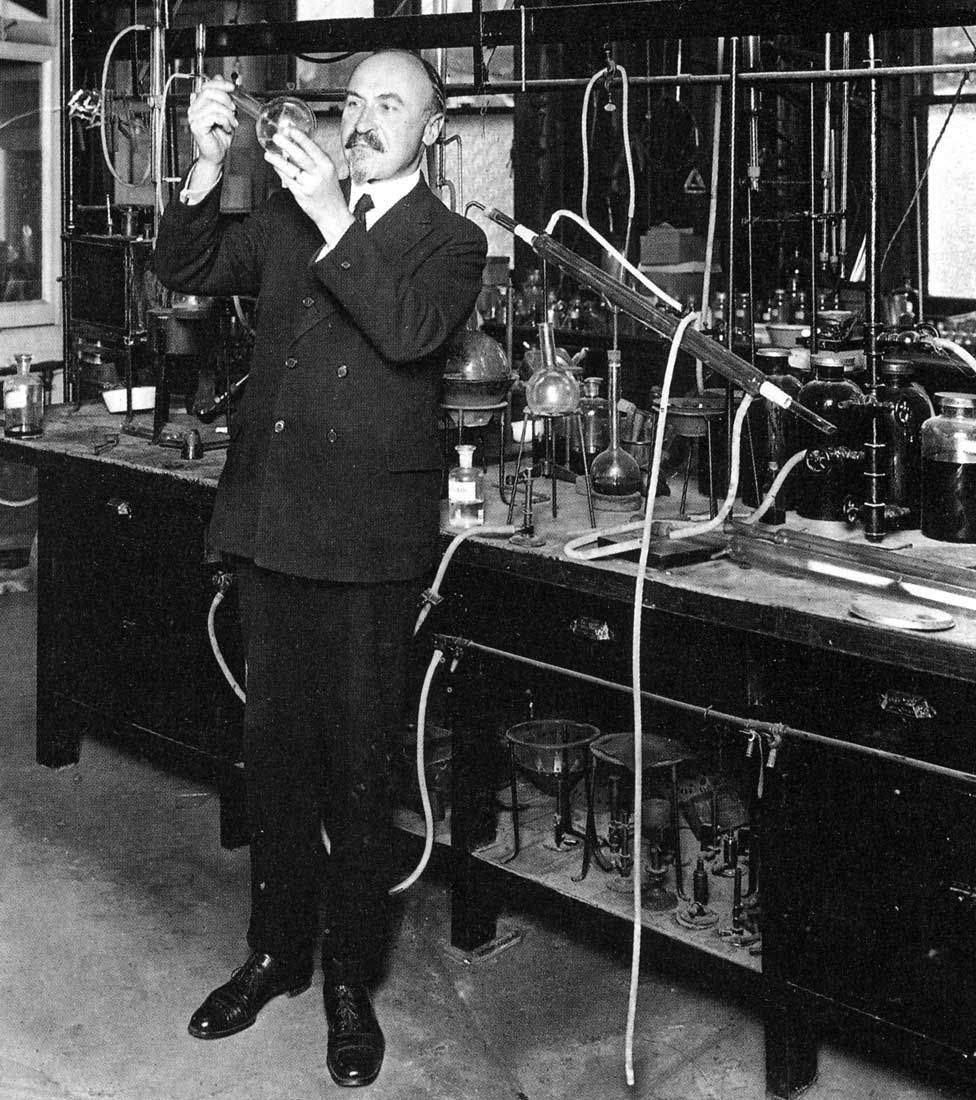 When was Plastic invented, how is plastic made, and when did it become so prevalent?

The invention of plastic

Plastics have been around since 1869, when John Hyatt created the first synthetic polymer to substitute for ivory.1 Ivory, a traditional, natural polymer used for a wide range of products from piano veneer to door handles and furniture, is created by using elephant tusks, which developed the need for a better alternative.2

The first mass-producible and fully synthetic plastic, however, wasn’t created until 1907 by Leo Baekeland – called Bakelite.5 It was marketed as the material of “a thousand uses”, while highly durable, heat resistant, and insulative properties. Plus, it was ideally suited for mass production with low costs and abundant resources. This invention launched a widespread R&D interest in synthetic polymers for uses across multiple industries.

World war II was a major turning point for plastics. The need of synthetic alternatives to scarce natural resources catalyzed a strong push to find every use that could be found for plastics. Plastic was cheaper, easier to make, and easier to find the raw materials for. In 1935, Nylon was invented by Wallace Carothers, which was then implemented into various war materials from parachutes, ropes, helmet liner, rope, and more, alongside other plastic uses such as plexiglass which was utilized in airplane windows.1 After the war, spending was at an all-time high, and the uses for plastics began to extend into countless industries, taking the part of steel in cars, paper and glass in packaging, and wood in furniture.1 Almost every bottling and consumer product company switched to HDPE (high-density polyurethane) to make milk jugs, juice bottles, kids toys, and every other common day use we see.3  The low production cost and convenience of plastic disposal was extremely enticing to both manufactures and consumers.

The optimism rave on plastics however, didn’t last. Pollution in oceans began being observed in the 60s, and the dangers of chemicals used for plastic manufacturing began to surface. In 1969, a major oil spill into the Cuyahoga River from plastic manufacturing caught fire, raising massive concerns about the viability. Stigmas also began to change, framing plastics as cheap, flimsy, and fake.1 However, the sheer efficiency of plastics kept the industry growing, despite the concerns amongst environmentalists.

Plastic lasts forever in the environment. It does not decompose, break down, or return to the earth in a natural state. “Plastics made from fossil fuels are just over a century old. Production and development of thousands of new plastic products accelerated after World War II, so transforming the modern age that life without plastics would be unrecognizable today. Plastics revolutionized medicine with life-saving devices, made space travel possible, lightened cars and jets—saving fuel and pollution—and saved lives with helmets, incubators, and equipment for clean drinking water.”While the positive uses for plastic are undeniable, the vast majority of plastic production revolves around the “throw away” culture that plastics have allowed.4

What types of plastic pollution exist?

With so much plastic being produced and wasted each year, there are a variety of issues that stem from the harsh effects of manufacturing, to outrageous amounts of plastic in the ocean, to overflowing landfills. 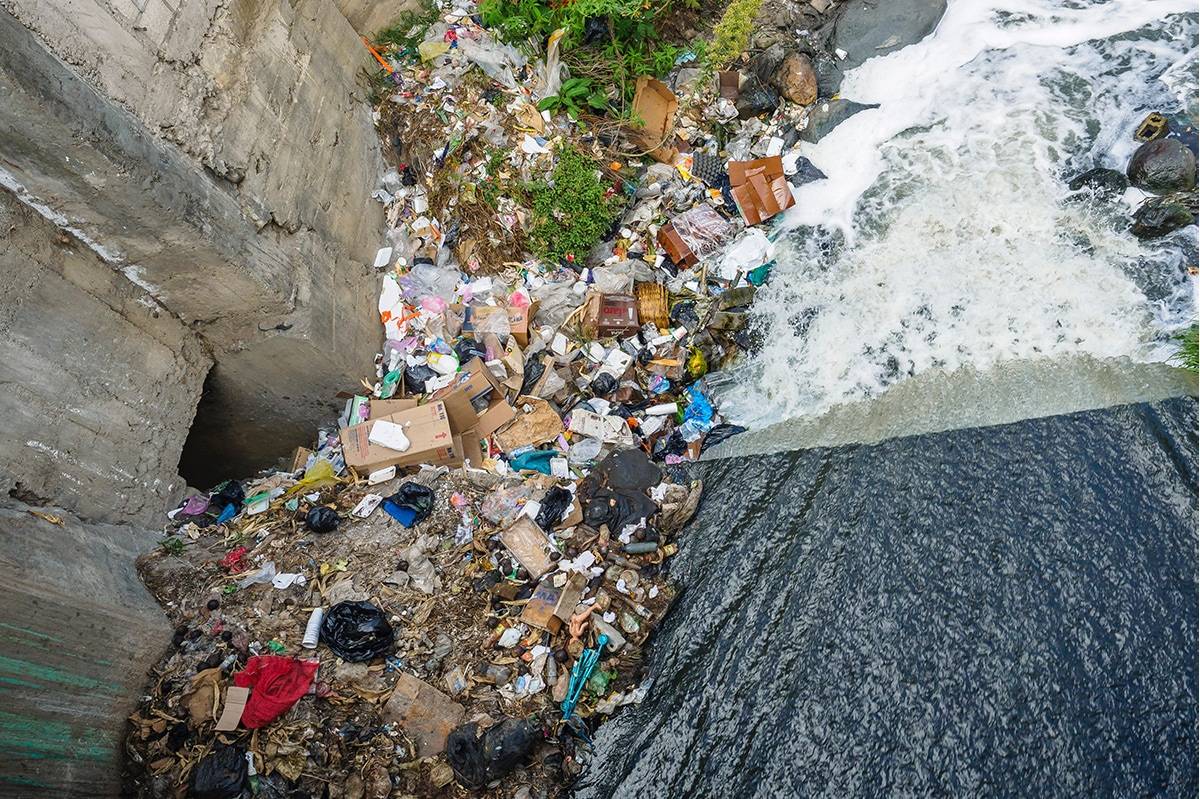 Oil, gas, and coal are the building blocks for plastic production. In 2015, emissions from plastic production were about 200 million metric tons of carbon dioxide, which is as much as 45 million passenger vehicles emit during a year, expected to grow by 34% by 2030.7

Producing a 16 oz. PET bottle generates more than 100 times the toxic emissions to air (nickel, ethylbenzene, ethylene oxide, benzene) than making the same size bottle out of glass.6 Plus the amount of oil needed to create plastic is overbearing. Today, about 4-8% of annual global oil consumption is associated with plastic production. With current trends of consumption, this number will increase to 20% of all oil pollution by 2050.7

Plastic pollution in the ocean

Every year, about 8 million tons of plastic waste escapes into oceans – the equivalent of 5 garbage bags full of trash on every foot of coastline around the world.4 The perfect example of how serious this is – The Great Pacific Garbage Patch. A “swirl of plastic garbage the size of Texas” floating in the Pacific Ocean.

Aside from the obvious problems that this causes to marine wildlife, over 700 endangered species, it also effects not so obvious bystanders. Almost every species of seabird eats plastics.4 In fact, over 100,000 marine animals are killed each year by plastic bags alone.8 The largest problem with plastic waste in seas, is it is almost impossible to retrieve the plastic, especially once it begins to break down into microplastics, drifting through open water columns and scattering through the ocean. 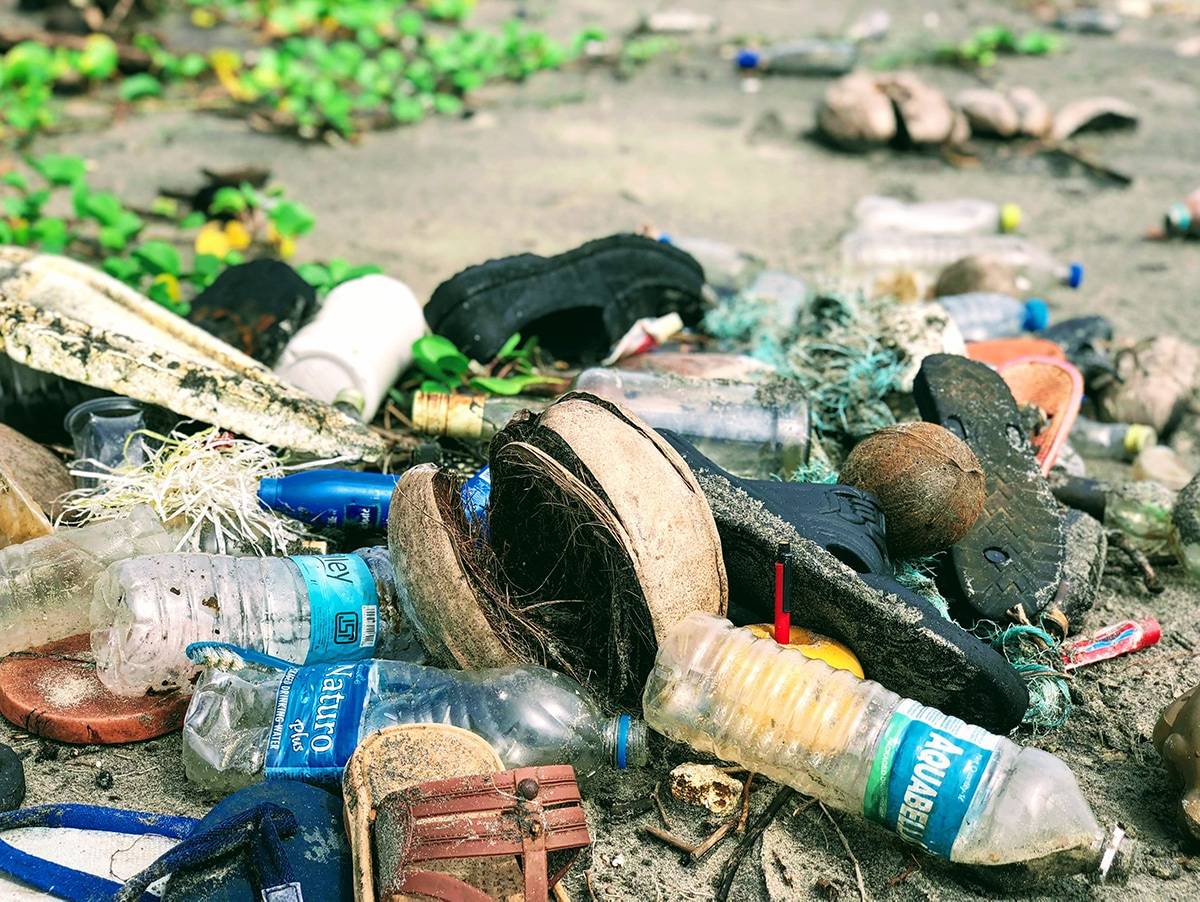 “Plastics often contain additives making them stronger, more flexible, and durable. But many of these additives can extend the life of products if they become litter, with some estimates ranging to at least 400 years to break down.”4 The rate at which landfills are growing far outweighs the rate of decomposition.

Landfills are not a solution, but rather diverting the problem. Plus, plastics buried in landfills can leach harmful chemicals that spread into groundwater, and find their way back into bodies.

The Problem with Plastic Recycling and Incineration

You may think, well, plastic can be recycled, so it is really that bad? In 2015, only 20% of all global plastic consumption was recycled – meaning an overwhelming 80% contributed to environmental issues. But, even then, how “green” is recycling plastic?

Recycling brings a whole new set of problems and is hard to justify. Compared to the low cost of virgin plastic, recycled plastics can be up to double the cost for companies, which makes profitable recycling extremely difficult. Thus, recycling is only really considerable under substantial government subsidies.

To no surprise, this pigeonhole shows in plastic recycling rates. Only 2% of plastics are recycled into products with the same function, and the other 8% are “downcycled” into lower quality products.6 Every time plastic is recycled, the polymer chain and quality of the plastic decreases. The same piece of plastic can only be recycled 2-3 times before it reaches the point where it can no longer be used for any application.10 This means that even if 100% of the millions of tons of plastic consumed yearly were recycled, we would get less than 3 years out of one batch. This is a stark contrast to glass, whose structure remains valid through recycling, and can be reused indefinity and recycled without loss infinitely. On top of this, guess what? Dirty plastic CANNOT be recycled. Any plastic with leftover food, or substance in it is impossible to recycle – it must be washed before there is any value.

While recycling curbs the issue and slows the problem, it is an impossible solution. Virgin plastic will always need to be created in order to continue use in modern day society.

Many say that incineration could be the key to the plastic crisis, but the effects of incineration are serious and far from negligible.

Plastics are petroleum-based products, making the burning of them extremely harmful to the earth. In 2016, U.S waste incinerators alone released the equivalent of 12 million tons of carbon dioxide, only further propelling the greenhouse issue that plastics already pose.

Furthermore, we already mentioned plastics can contain additives to extend life and durability, which can add another level of pollution to the system. In addition to direct pollution, these can absorb and travel long distances ultimately depositing in the ocean, polar ice caps, bioaccumulation in the food chain, and eventually, marine and human health.

“The climate impact isn’t the only concern. Incineration facilities are disproportionately built near communities of color and low-income populations.”7 Incineration can also release toxic pollutants such as dioxins, acid gases, and heavy metals like mercury and polychlorinated biphenyls (BCPs).“This includes direct toxicity, as in the cases of lead, cadmium, and mercury; or carcinogens, as in the case of diethyl hexylphosphate (DEHP). Problem chemicals are used as plasticizers, antioxidants, colorants, flame retardants, heat stabilizers, and barrier resins.”6 These pollutants have been shown to contribute to the development of asthma, cancer, neurological damage, endocrine disruption, and more.12

In short, the burning of plastic waste inherently increases the risk of heart disease, respiratory issues, and nervous system damage in low-income communities. The effects of this contribute to the ongoing struggle of social and economic equality. I

Many companies have strived to develop technology in which the energy from burning plastic is recaptured by systems to be used for electricity. These forms of incineration are called gasification, pyrolysis, and plasma arc. While in concept these provide value, there are two main issues with this approach. The first, it still allows for the release of the dangerous pollutants which come from burning plastic. Second, and potential more important to the companies leading the charge, is the astronomical cost to develop the infrastructure, and un the facilities. According to the GAIA, it would cost between $5-54 billion per year to run each large scare incinerator facility built to European standards of health and safely. This makes the electricity they would sell, far more expensive than their fossil fuel counterparts, and renders the solution economically unobtainable.

Plastic Packaging – Just. Ain’t. It. While the ease of single-use plastic is attractive to the consumers, and the low production and transportation costs is extremely lucrative to companies, we are running ourselves into a problem that is irreversible. It is on both companies to be conscious with packaging and consumers to be conscious while shopping.  The plastic crisis is the biggest reason we choose to use glass bottles and offer a refillable system. You can purchase your Shultz pack here.